Last week, I wrote that each week I would be performing one random act of kindness in honor of the kids from Sandy Hook, victims at Boston Marathon, and all the other victims from senseless acts of violence.  You can read that post here. 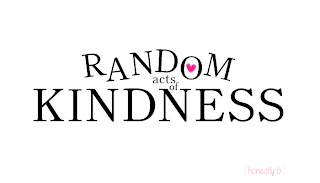 This week, I bought a $5 Tim Horton's (a popular Canadian coffee joint) gift card and placed it under the windshield wiper of a stranger's vehicle.  I wrote on package, "To: You   From: Me   "Hope you get a smile, pass it on."  I don't know who got that card, but I hope it brought a smile to their face.  I'm disappointed in myself because it didn't occur to me at the time to take a picture. :(  Oh, well, next time!

In other news, on Friday the blogosphere was a-buzz with new runDisney news.  You can read the full press-release here.  If you haven't heard, to sum it up: runDisney has announced they will have a new challenge at the 2014 Princess Half Marathon Weekend at Walt Disney World.  Similar to the newly announced Dumbo Double Dare and Dopey challenges, there will be an all-new 10k race offered Princess weekend.  If you complete both the 10k race and the half marathon, you will complete the Glass Slipper Challenge and receive an additional medal.

As new in 2014, there will be a special edition Coast-to-Coast Race Challenge Medal for those who complete the Tinkerbell Half Marathon in Disneyland in January and the Princess Half Marathon in February.

Source
What do these new announcements mean to me?  I'm not sure.  All along, I have been planning on running the Tinkerbell Half Marathon in January.  Being from the Canadian Prairies, Disneyland is a lot quicker and easier to get to.  At Disneyland, we can stay across the street and walk to the parks.  BUT, the Glass Slipper Challenge is throwing a wrench into my plans.  And the special edition Coast-to-Coast Race Challenge Medal is really messing with me.  I have myself questioning whether there's anyway I could fit a solo trip to the Princess Half Marathon to get them all!
Question of the Day: What would you do if you were in my shoes?  Tinkerbell Half Marathon or Princess Half Marathon?﻿
﻿
Posted by Everyday Girl at 9:14 AM