Last week my family became a statistic.  A very lucky statistic, an incredibly fortunate statistic, but a statistic none-the-less.  Five days ago, my father-in-law was seriously injured in a farm-related accident.  He came out incredibly lucky, but his life will be changed.  I struggled with whether I should share this story on here, but ultimately decided I would.    Most of you reading this are probably not from a rural area, and you may not have anything to do with the agriculture industry.  Maybe one person reads this and is a little extra careful tomorrow at work.  Because this isn't only just a story about farm safety, it's a story about workplace safety and many occupations have hazards associated with them.

Source: http://kidshealth.org/teen/safety/safebasics/farm_safety.html
Studies indicate that annually, between 5% to 10% of the agriculture population are injured in non-fatal accidents.  (Source: here)  On Friday, our family farm became part of those statistics.  My husband's family operates a mixed farm; a grain and cattle operation.  My father-in-law was moving grain out of a bin using an auger.

Source: www.brandt.ca
This is a busy time of year at the farm.  They are calving (the process where cows have their babies) and preparing for seeding (planting of the crops in the spring).  It is a busy time of year with an endless amount of jobs to be done.  In a split second, my F-I-L took one wrong step and instead of stepping into the bin, stepped into the auger.  He has been around them his entire life and knows how careful you need to be....all in took was one second of not paying attention.  Thankfully, the auger stalled and he was able to pull his foot/leg out before even more damage was done.  He was rushed by ambulance to the hospital and hours later had surgery.  His toes were gone and he had severe damage at the end of his foot.  The Doctors made the decision to amputate the front half of his foot.  He is left with his ankle, heel and back half of the foot.  He will be able to get a prosthetic so he will be able to walk, golf, and return to the career he loves.  The spectrum of the farm may change, as he will not likely be able to keep up with cattle, but he can return to work the land. 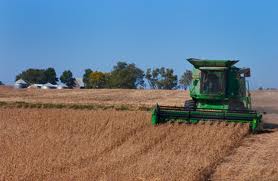 Source: Private Photo
The bottom line is: he was lucky.  There are a million different things that could have happened to have this ending be different.  If the auger hadn't stalled, it could have sucked in more of his leg, or worse if he had fallen into it.  Each year, there are many deaths due to farm accidents.  We are incredibly lucky to not be part of those statistics.

Source: Private Photo
﻿
Please take your time and be careful.  Whatever industry you work in and whatever job you do, there is someone who loves you and is worried about you.    Please return home safely to them.