In August I spent 10 days at the Royal University Hospital in Saskatchewan.  It felt like a really long time.  While there, I was so appreciate of the amazing, professional staff who helped treat me.  I switched rooms three times and was placed on two different wards and don't have a negative thing to say about anyone who cared for me.  But, that being said, there was one nurse who went above and beyond duty.  She was kind, compassionate, and advocated for me.  She made me laugh at the times when I needed it the most and did everything in her power to make my stay more comfortable.  When the Doctors hadn't stopped to see me with results from a test, she would call them.  She offered me support and comforting words at the most critical times.  I was truly grateful for her presence but wasn't sure how to properly say thank you.

Yesterday, I was back at RUH to do tests and meet a lung specialist.  I had several hours of waiting and decided to do some Random Acts of Kindness, one in honour of each of my children.  I picked up three $10 gift cards to Starbucks (which is on the main level of the hospital).  I immediately remembered Dominique, and how amazing she was to me, so decided to deliver one gift card up to the Oncology ward where she worked.  I wrote on the other two cards and tried to decide how to give them out. 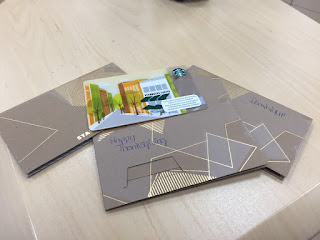 Oddly, I was feeling a little shy and didn't want to walk up and hand them to people.  I am not sure why, but just didn't have it in me.  Instead, I stuck them in two random spots on the main "mall" area of the hospital where someone would be guaranteed to see them.  I hope they found their way to someone who was having a bad day and brightened it up even a little.  After spending time in the hospital, I found that it was very stressful and sometimes the smallest things comforted me. 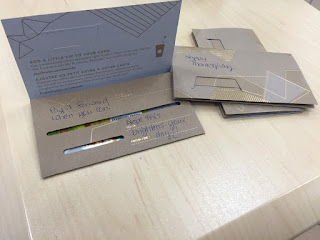 There's my most recent Random Act of Kindness.  I hope they brighten someone's day and in turn, I hope they pay it forward.  Happy Tuesday!!

Posted by Everyday Girl at 6:21 PM